Officer, what is wrong with my driver's license? 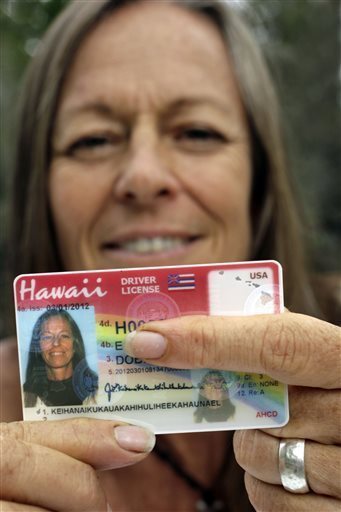 Driver's License Troubles
Interesting story out of Hawaii where a young lady was pulled over by a police officer for a traffic violation (presumably speeding or something) and given a hard time because her driver's license omitted her first name and actually cut off part of her last name.  She told the officer that was what the driver's license bureau gave her.  Apparently, in the state of Hawaii, their computer system will not allow for names longer than 35 characters and her name was Keihanaikukauakahihuliheekahaunaele .  The officer suggested that she use her maiden name, which was considerably shorter.  She got the local TV station involved and it appears that by the end of the year, Hawaii will allow 40 characters for the first and last names and 35 characters for middle names.  Interesting to think that one person could essentially force the state to change their whole system.  What happens when someone legally changes their name to be 50 characters or even 100 characters?  Does that mean that the state should change their system again.  In this day and age when people can legally change their name to anything, including silent Chinese characters, how does a government respond? And should they respond?  What if the name has profanity in it?  What if the name is a deity, like a set of parents tried to name their son and was recently struck down by a judge?  Does that state conform to the person (citizen) and make whatever accommodation is necessary, or does the citizen conform to the state for purposes of utilizing and accessing the state system?

Christopher E. Kopecky. holds the highest rating (A-V) an attorney can hold for competency and integrity, and has done so for over a decade (Martindale Hubbell and Lawyers.com). Chris Kopecky is the founder and lead counsel of the Traffic Lawyers of Kopecky Law, P.A. He is a teaching lawyer. He is a professor of law at several colleges, including Avila University and Rockhurst University, where he has been teaching litigation for over 12 years.